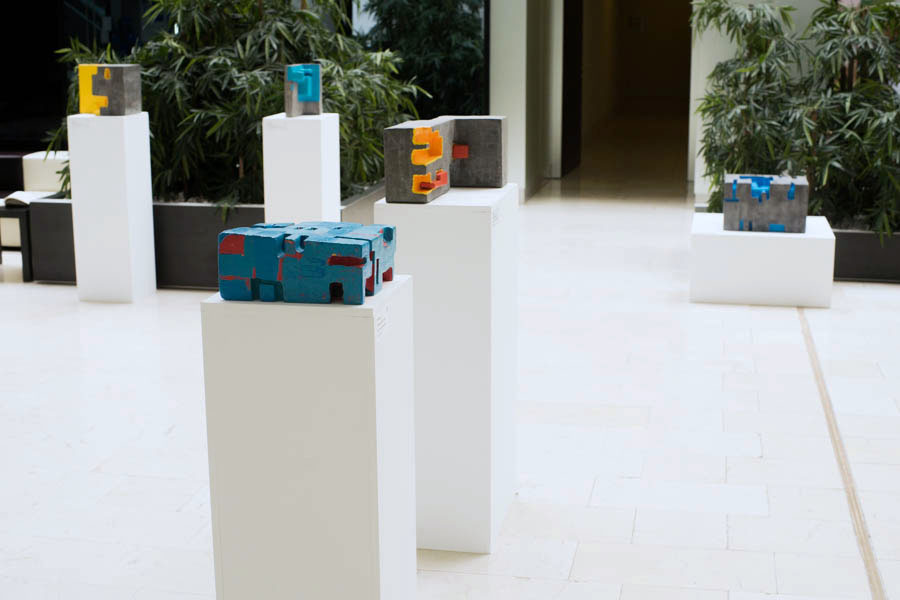 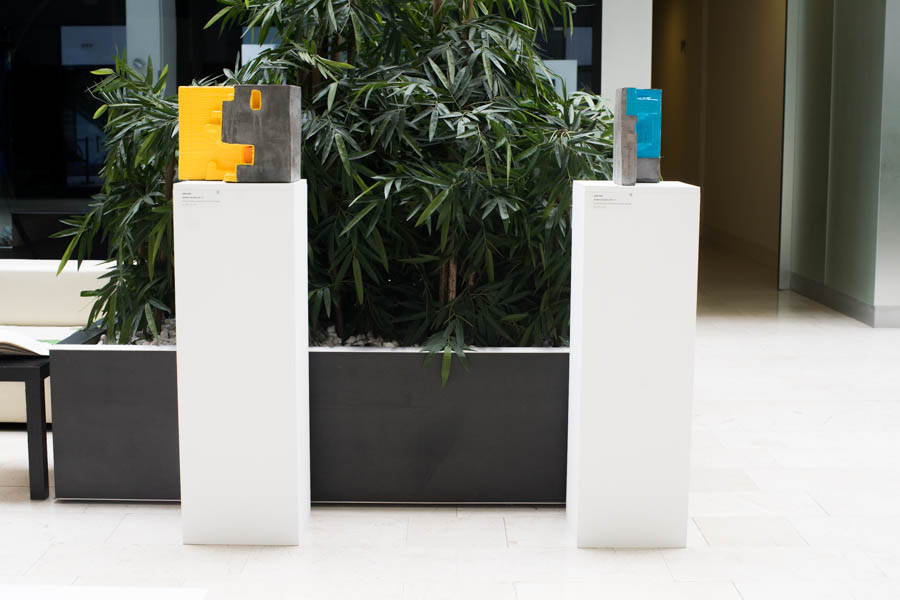 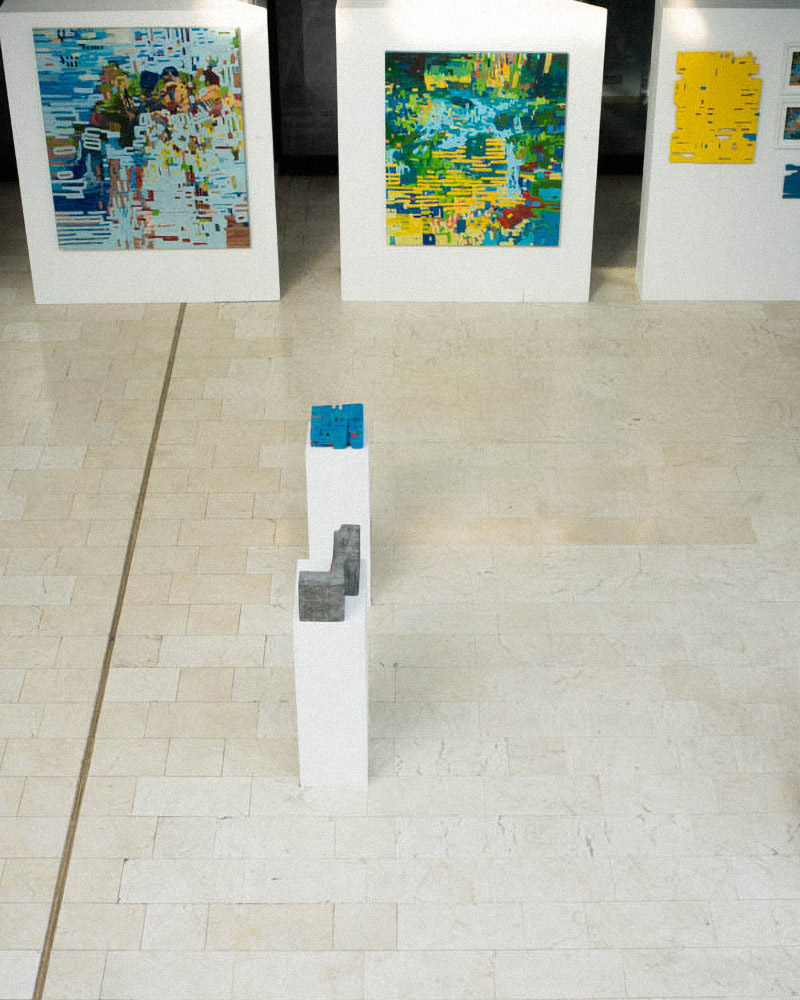 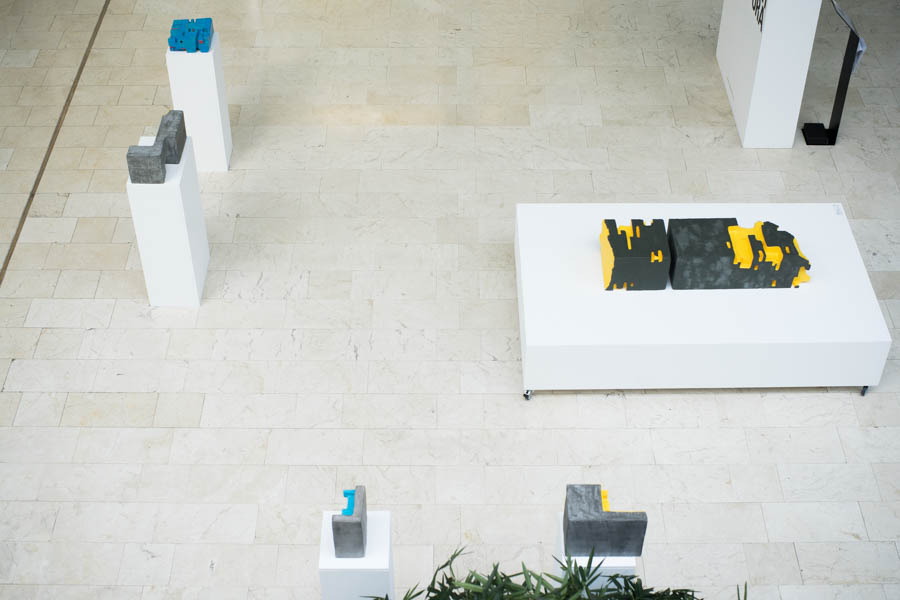 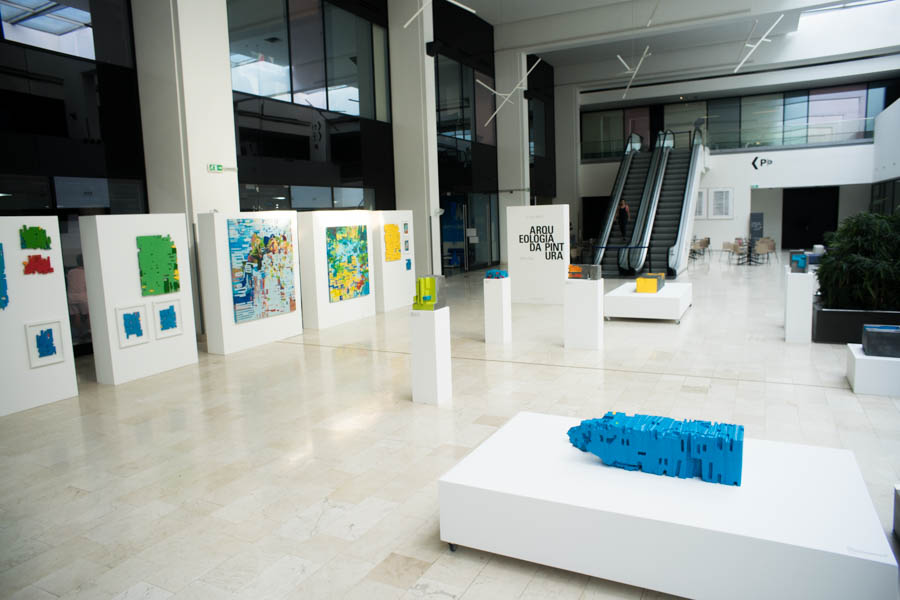 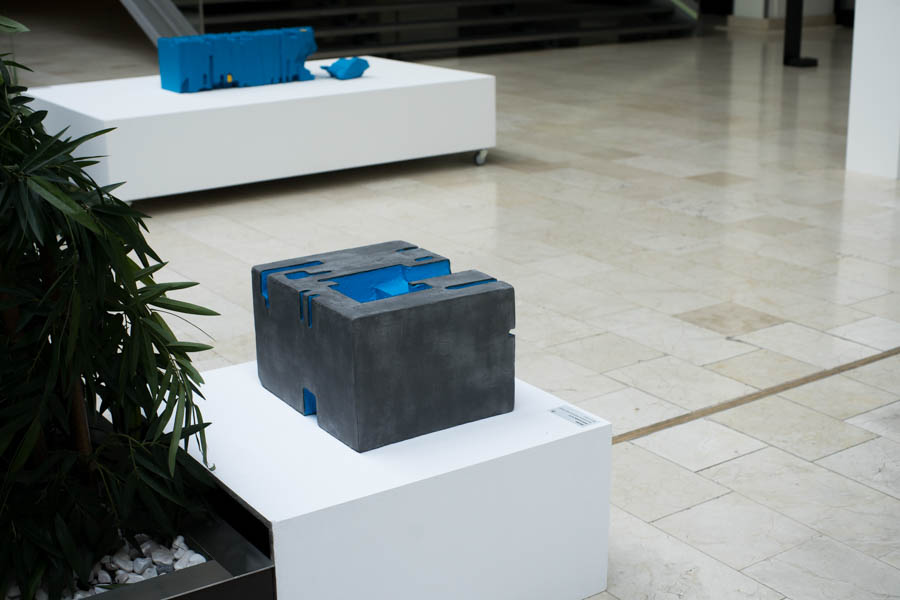 The exhibition Archeology of Painting is created around the exploration of painting’s language and its “archaeologyzation”, from traditional oil painting on canvas to its materialization/sculpturing. In this artwork João Dias uses fragments of paint as bas-reliefs shapes and sculptural forms that reminds us of primitive figures and civilizational traces, or contrarily it evokes organic pixels and fitting parts of complex machines’ pieces of a forthcoming future. Pursuing simplified and organic shapes through orthogonal movements by using solid colors. His painting takes on brushstrokes as rhythm and shape to model the image into the canvas.

JOÃO DIAS AND BLIND PAINTINGS TO THE TOUCH

What is João Dias doing since he graduated a few years ago in Fine Arts (better – saying, by the way, this is a broader term than Painting, the subject in which the artist was actually graduated). What does he do?

I would say that João does much of what he was already doing in his training/education period, which means that an educational period can already express the “statute” of authorial statement (naturally). He does, as he did, bas-reliefs of paint, he practices drawing in polystyrene or wood (therefore, “out of” the paper or two dimension), and all is alternated with a vocation to treat color with an extreme light intensity (generating pictorial sculptures that are extremely artful or artificial). In short, in that medium that has blindness as an essence (the painting) João Dias sees in the light (if I said “blindness” it was because light blinds, as known – look to its source!!), João Dias sees in light the origin of painting, to which we add color (the direct consequence of light),  an origin that is the aim of any “archaeologist” of painting, to follow the relevance of the title of this exhibition.

Ernst Bloch, in his monumental work that is “The Principle of Hope” tells us about consciousness and “inner eye”, and “to look inside”, and says something that we can apply to all types of gaze or to the look itself: “the inner eye never projects a homogeneous light. It is frugal, only shines a part of us.  We do not have conscious of what is not directly caught by our gleam of awareness. We only have a partial consciousness of what is given across, in an ascending or descending extension of awareness. The consciousness field is too narrow, and it goes out from all sides and it retracts in all its dark angles and it dissolves. Even before a mental occurrence be forgotten, even when it is not forgotten, much of it is not conscious”.
There is not an “Archeology of Painting” (regarding that this blind spot is the origin of Painting, of seeing and of image) without an intensification of an “inner eye” (partially blind to the exterior) and a stroke of awareness to the world (partly blind to the interior), and in a “fusion” of both, pitfalls are so many, the noises are so many that we can do nothing without a specific dimension of real, figured in touch, obviously  – for who knows this work, or João Dias’ path.

And so we have the purpose of the two monochromatic sculptures (monolithic, that still evoke pre-historical monuments), but yet unformed (!), where non-natural colors punctuate, the reason of being of his paintings on sculpted wood  (generating peculiar  flat supports, but with prominence), woods that are support and artwork simultaneously, occupying rectangular areas but recessed and with irregular angles or subtle cut shapes, that, in turn, recall to the painter’s gestures in works like “Taking a Picture” or “Taken Picture”.

To give a painting or having it given meets much of what here has been said: it does not depend only of gestures, more or less expressive, it, the painting gives or is given, not necessarily done or realized. It emerges from a paradoxical obscurity: light. Then, color is transformed into matter, object. And painting gets lost in the space and it has no limits.